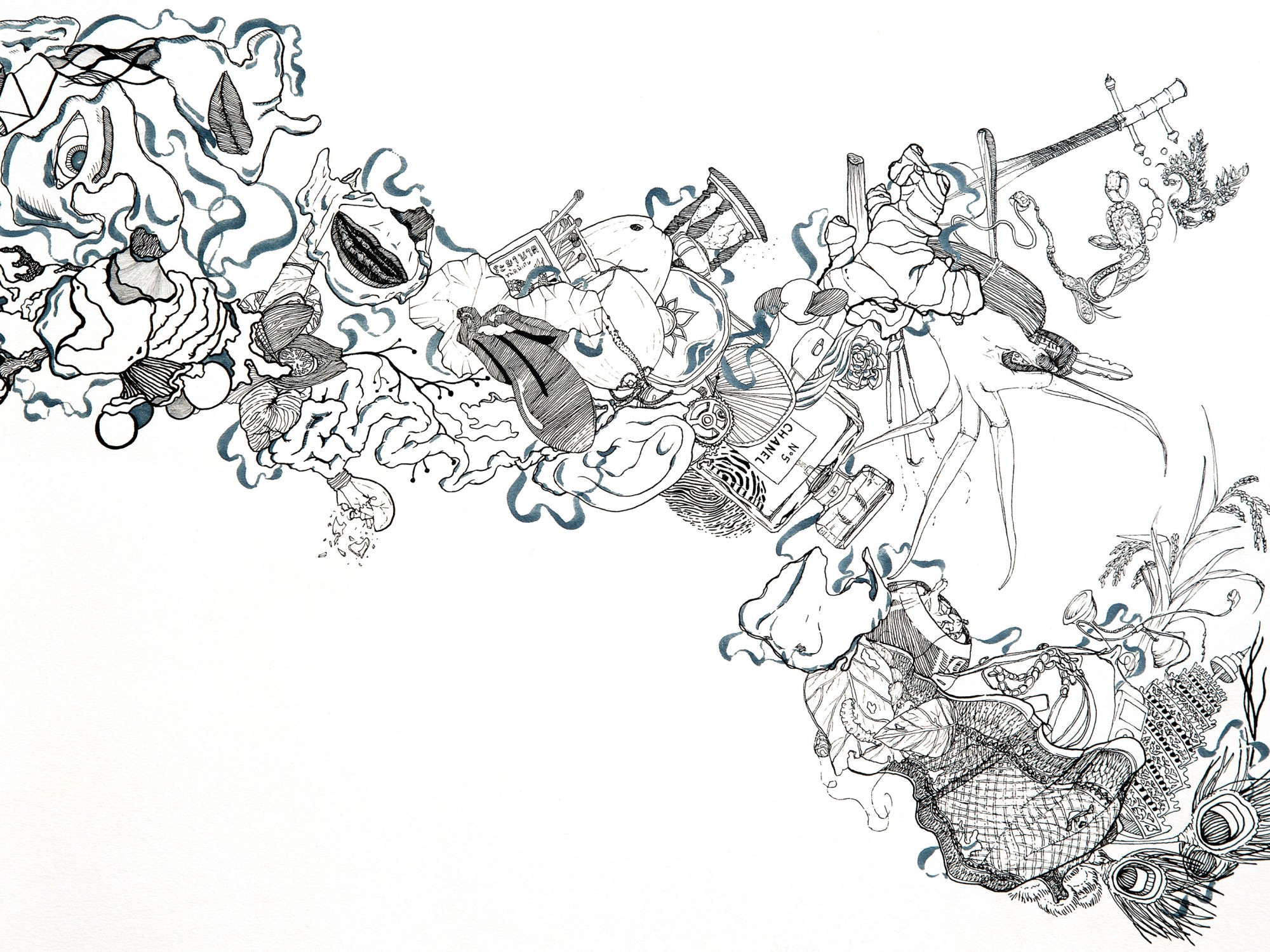 The following is a series of works done primarily for the IB Visual Arts course in preparation for the architecture school portfolio sent to various universities. The work is not focused on architecture, but the craft and creativity that has been involved in the process of their creation. The first part of this section is a compilation of largely monotonous works while the second part will be composed of more colorful creations.

This first piece is a three-piece series titled “Siam to Thailand”, which depicts the transition of my home country from initially being called Siam to the title Thailand we know of today, symbolizing both positive and negative changes in culture, from old to new and from Thai to foreign.

Demonstrating the gradual increase of foreign influences, this first piece is still very traditional, showing only few hints of western influences like the barber and utility poles. Wat arun temple’s main stupa dominates the skyline, sitting on the Thonburi side of the Chao-Phraya river as a symbol of a former capital and dynasty and of old Thailand.

This piece is a metaphorical representation of foreign influences washing up the shores of the Chao-Phraya. Old buildings and bell towers are demolished to make way for new buildings and entertainment centers and canals filled in to pave roads and train routes. The Thai flag deteriorating in the foreground is a symbol of a waning culture. 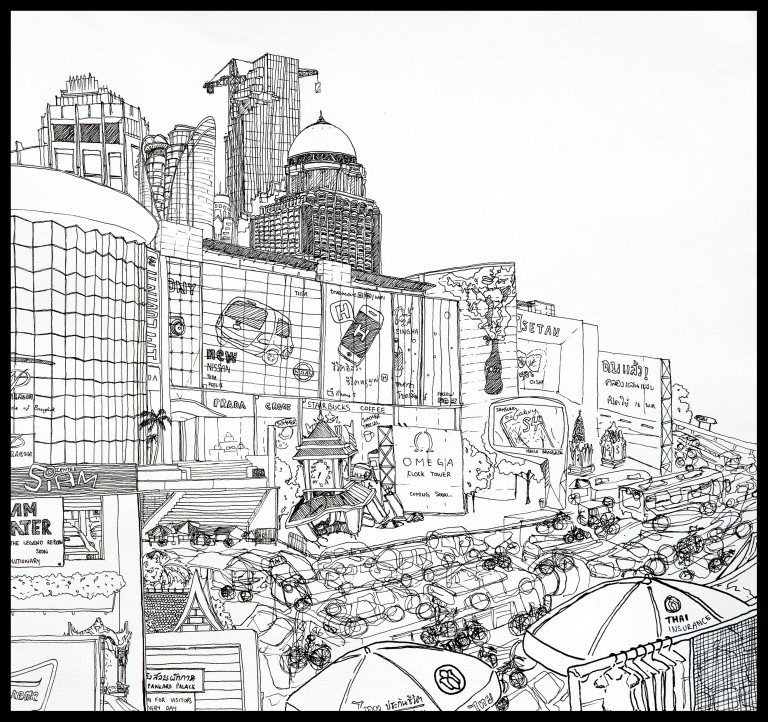 The last piece of the series, this panel illustrates downtown Bangkok as it appears today, bombarded with foreign brands, with advertisements plastered all over the Paragon and Central World shopping complexes. The Thai clock tower with Thai numerals is demolished to be replaced with that of Omega. The elegantly modest Suan Pakkad Palace is tucked away between skyscrapers and towering office buildings, representing our full embrace of western culture today. 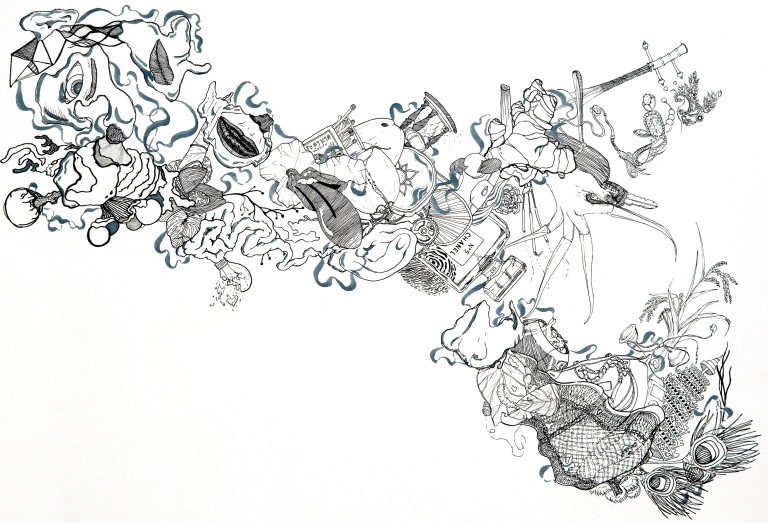 An Interlacement of the Old & New

Similarly, this piece depicts foreign influences in Thailand, but on a more domestic level. Thai technology like coconut shell time keepers, stringed instruments and bamboo fans are juxtaposed with light bulbs, iPods and electric fans. A blue ribbon connects everything as a symbol that despite differences, Thais can still go together harmoniously wih the modern world. 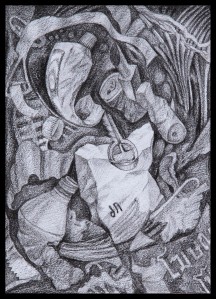 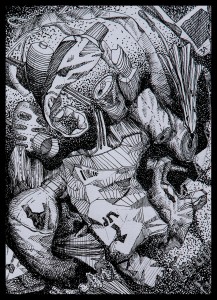 Another three-piece series, surrealistic presentations of the excessive littering in Thai society, a serious issue during the 2011 floods. The swirling motion of the trash resembles that of a clogged toilet trying to be flushed away.

An oneiric representation of the prevalent over-consumption and littering of junk and fast foods in my community. Only warm tones are used to convey the severity of the overlooked issue.

The same image and composition as the first panel of the series for a change in perspective, with this one having a crisper touch in comparison to the one done in pencil, which has a clouded feeling towards the issue.

An observational piece done on a week-long trip with my school to a hill tribe in Maehongson in Northern Thailand. The tin roofs on the traditional stilt houses demonstrate how urbanism is slowly seeping into the Karen village despite a seemingly pure and all-natural appearance.

An observational drawing of an old Kratone found in my grandmother’s house. The Thai equivalent of a spit bowl or trash can.

A loose sketch of my mother’s handbag captures a state of exhaustion and fatigue that gives it an almost human-like feature.

White lotuses grow from the filthy mud that lies at the bottom of canals, but bloom into clowers so clean an pure that they can be used as offerings to highly revered monks; for this reason, the white lotus is a syble of the utmost level of purity in Buddhism and Thai society. Today, Thais feel foreigners are disrespectful just because they don’t accord to Thai customs, a strong misconception. The white rose, a western flower strikingly similar to the white lotus is drawn in a distorted visualization to represent how despite differences, we are still alike.