One of the aspects of Judd’s work that inspired the design of my museum annex is a concept called phenomenology, that is the study of how phenomena appear in object-oriented, or “intentional” consciousness. Judd achieves this by his meticulous use of spatial alignments and relationships between objects and the environment in which they situate, which is best seen in his architectural works and interventions. At 101 spring street, his kitchen epitomizes this technique, where the horizontal lines or heights of the window sill and mullions dictate the heights of door openings, furniture and even the size and positioning of canvases. This careful alignment renders the ordinary, phenomenal, and I wanted to translate this effect to an architectural scale, one that can be experienced at street level. To do so, I imitated the Judd Foundation’s floor heights in my building to emphasize the conversation between the two which also coincides with Judd’s interest with mirroring and reflection.

The mirroring of the Judd foundation was not only limited to the larger scale, but also translated down to the facade details. The castiron facade of the judd foundation increased in width and complexity as it progresses upwards, with classical pilasters as decorative motifs. In a similar manner, a Miesian approach was used, by adding decorative metal channels and beams to the facade. The final design used a series of abstractions on Judd’s later extrusion artworks to add a level of depth and complexity on the facade.

Judd also reinforces the reading of his spaces by tailoring artworks to the proportion of the space or room that houses them and by treating architectural features as objects in a larger space. In a similar fashion, the main staircase in the museum lobby is proportional to the area of the lobby, and its solid appearance emphasizes its presence as an object in the space.

One of my main moves after mirroring the Judd foundation was inverting the hierarchy of the foundation’s circulation. At the foundation, the main circulation of the galleries is tucked away in the interior wall, where there is no sunlight, and an iron fire escape attached on the facade (show in red dashes in site plan).

Instead, I brought the main circulation out where the mirrored fire escape ladder would be, and tucked the egress core where the main Judd Foundation circulation would be. This not only improves the experience of the promenade through the galleries by allowing the visitors to experience their surrounding context, but also gives them the sense of the promenade by adding the experience of not only seeing but also being seen by pedestrians at ground level when traversing the stairs.

A lot of Judd’s artworks are dependent on iterations, making them appear redundant at first glance, but unique in their details. Although the gallery floors of the annex are almost identical, the treatment of the finishes of the floor, walls and ceiling are different. In addition, all the residential floors appear almost identical on the facades facing the Mercer-Spring intersection, but as seen in the floor plan thumbnails on the right above, every floor is different. Additionally, the residences are organized into sectionally interlocking duplexes that add a moment of surprise into the living space, and a more dynamic experience of the space and context. 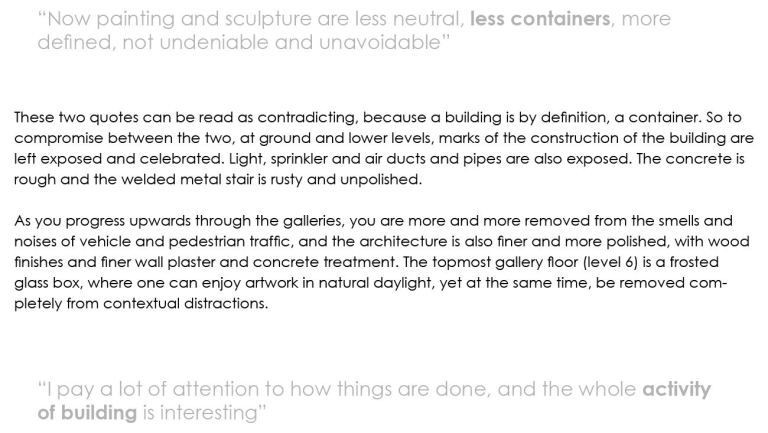