Carnegie Mellon is a powerhouse in neuroscience education and research, but currently the expertise in the different areas including but not limited to child cognition, animal behavioral research and FMRI testing facilities are hidden all over campus, and the interdisciplinary entity has no visual presence on campus. So my proposal for the new brain hub or interdisciplinary neuroscience building sits on display to Forbes avenue, between the New Tepper and Morewood Gardens residential dormitory, and becomes a new landmark for the campus. In my master site plan, I am visioning a new academic building to the west of my building and a residential building towards the north, so the building becomes a connector between academic and residential parts of the new campus. My design bifurcates the program of the building into two halves, the first in the warm tone is for high intensity labs which require regularity to function efficiently and the cool tone on the left is comprised of the children’s school and computational sections of the research, which can have more flexibility in plan due to the nature of their activity. Sandwiched in between is an atrium corridor that serves as a threshold between the Tepper quad and the north campus which stretches to fifth avenue with the school’s projected acquisition of the WQED. The angling of the computational mass emphasizes the turn in the axis of the quads.

The two halves of the building are also a metaphor of the two sides of the brain, the logic and the creative in their forms. One is more rigid and the other more curvilinear. In the landscaping, a threshold is envisioned between the formal garden of the Tepper quad, and the organic gardens to the north. This is also to give the campus more greenery, as research suggests that biophilia and visual access to green space improves productivity. This would help make it more pleasant for the users of the building, most researchers spending entire days on end inside of it. The skylight monitors also allow for plants to grow inside the atrium for the same effect, and the atrium itself is further activated by having flexible programs such as conference rooms, teaching and computational labs jut out, so as to have the space feel like a canyon with the different programs visible to any lay person who is walking through the atrium corridor. Study nooks are also placed at the end of the corridors that connect the two wings of the building. 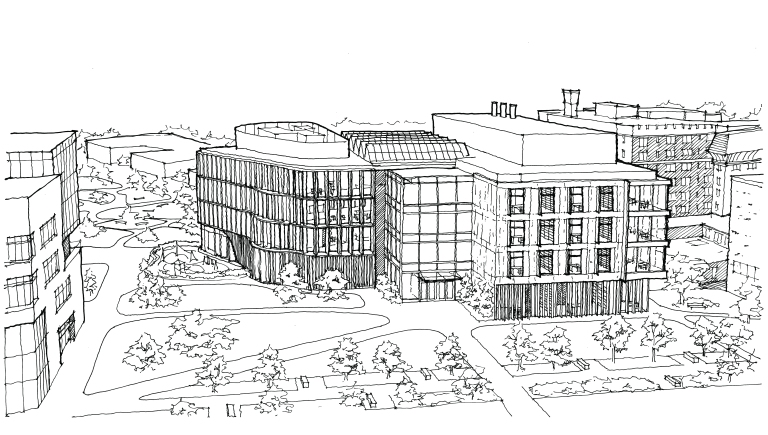