In cooperation with Somin Shim. Advised by Eddy Man Kim and Gretchen Craig. 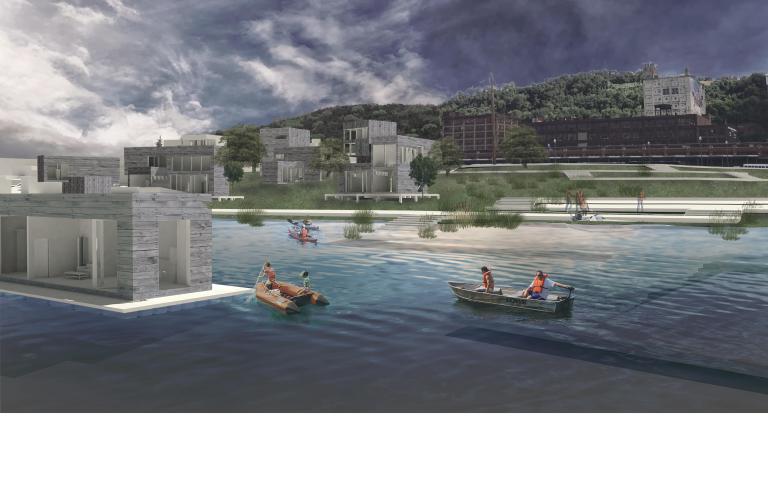 The design of a housing complex on the banks of the Allegheny River in Pittsburgh, Pennsylvania.

The focus of our project is based on our study of the flooding and erosion conditions in riparian zones. But instead of focusing on the systems of flood prevention and erosion control, we took the stance of flood resiliency, encouraging inhabitants to embrace inundation as a seasonal phenomenon just like rain or snow, instead of viewing it as a disaster. With this in mind, we adjusted the site topography so that it floods with designed intention, separating the site into three zones based on frequency of inundation. Always under water, floodable, and non-floodable, with the annual flood, decade flood, and the hundred year flood levels estimated at about 30 feet above average. 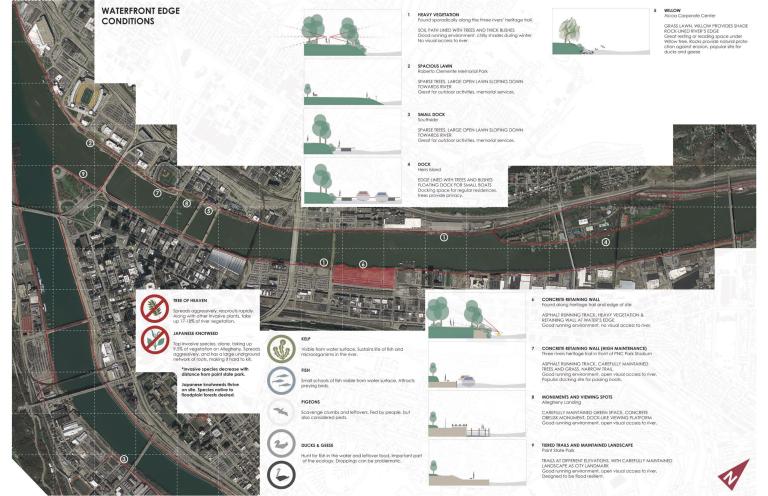 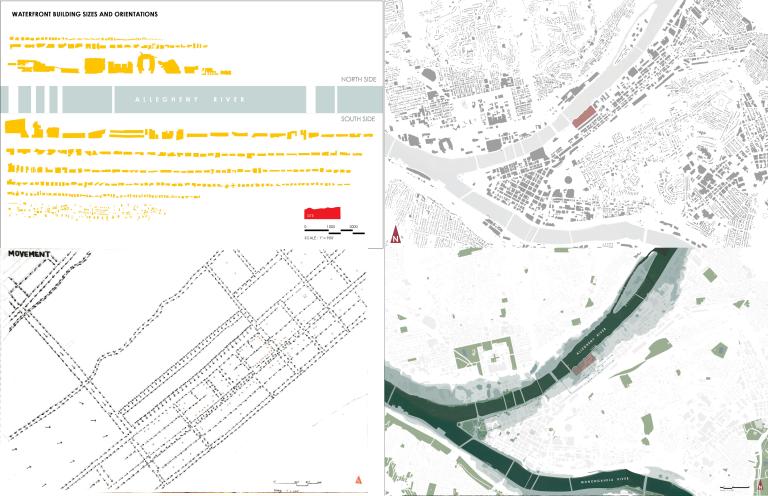 Then we introduced three types of housing units for each flooding zone. First, for the one always in water, a floating deck is used to adjust to any level of water, even for daily change in water level. For the floodable zone, a buoyant foundation system is used so that the houses can change elevation in the event of a flood. Long pilings under the foundation platform enable the house to land at the same location as water levels recede. 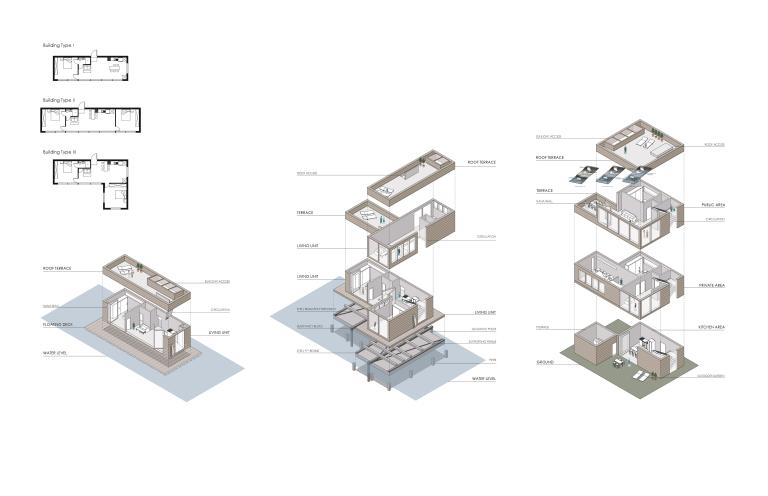 The formation of the units came from our precedent study on Pueblo Ribera, by Rudolph Schindler. The two main organizing factors for this complex was to provide private courtyard areas and roof terraces for open views to the water. We applied a similar strategy in both designing the configuration and placement of our units. As seen in the diagrams, open windows as terraces are present for the view, and either private deck or courtyard area is provided. The orientations of the houses allow for maximum view. 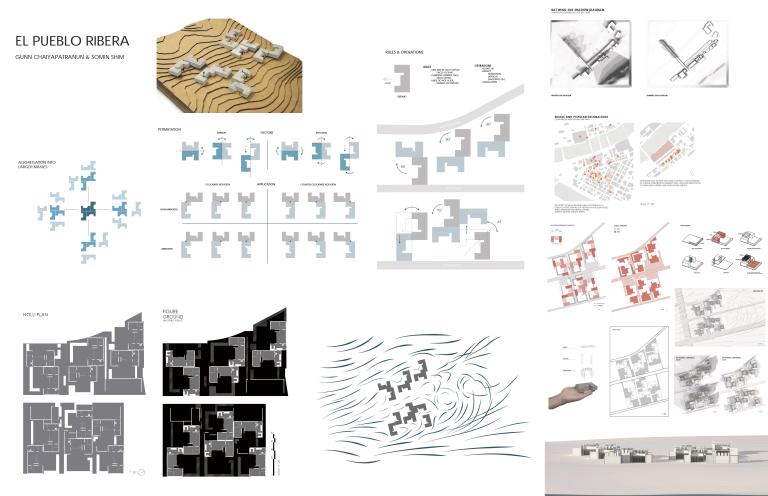 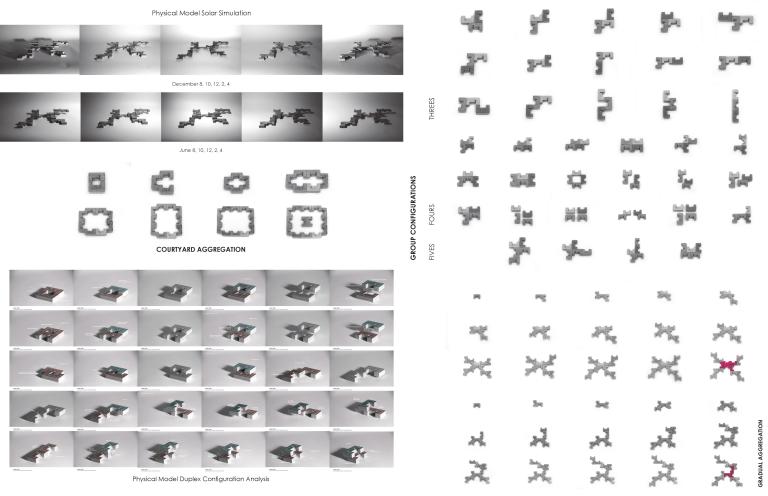 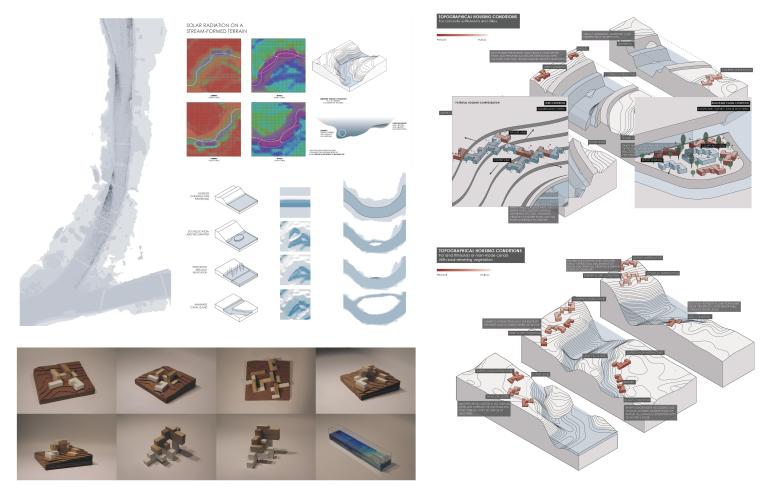 In addition, we sought to repair the riparian zone by constructing an artificial wetland, using indigenous species and wetland plants of northern climates. With the self-healing qualities of the plants and the river, the site will evolve into an oasis of nature in a tight urban fabric. 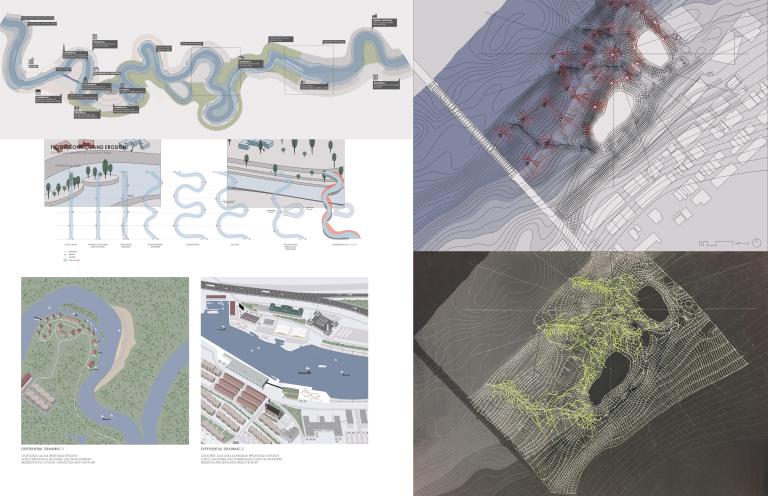 The stepped bioswale pools also help with the filtration of rain and river water in the regeneration of the riverbank, while at the same time, providing an auditory and visual effect emphasizing the presence of water on the site. 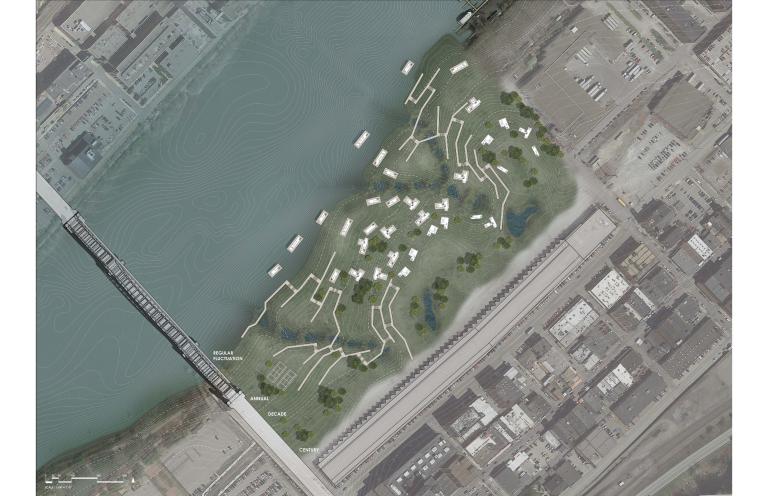 With this buoyant housing and artificial wetland system, we hope to break the paradigm of traditional waterside housing in a world where sea-levels are inevitably rising. By exposing inhabitants to the water, we are confronting the reality of not only flooding but also pollution, making water and air quality a higher priority and value in society.